I’ve written and deleted and re-written this about a dozen times and it’s been really hard to find the right words. But maybe that struggle is just an outpouring of fear of saying something wrong. Or maybe it’s because I’m a white man who can’t pretend to know what it’s like to live as a minority in this country.

But I do know that as a community of storytellers, as humans, we cannot ignore events like those that happened this weekend. Acts of hate, racism and white supremacy have rocked our country. My heart is broken and my hands aren’t sure how to help.

There are times throughout history that, regardless of our worldview or religion, call for our art and talents to be used for more than just our day to day jobs, and I believe that this is one of those times.

When evil and brokenness are on display, when hate is rearing its ugly head, this is when we have to remind the world of what could be.

After each day’s news, I’ve found it harder and harder to just “move on.” I really do believe in the power that storytellers have to establish new narratives. It’s why I stepped in to lead this community…it’s special.

I wrote this email after the Orlando tragedy last year and it seems just as relevant now as it did then. So since I couldn’t find the “right” words to say today, I hope that this will do to serve as a reminder of our role as storytellers.

As our country stoops in grief over the events in Orlando this weekend, I am reminded again of the vital role storytellers play in shaping our culture.
This year’s STORY conference theme was inspired by a quote by Walt Disney – whose imprint in Orlando seems eerily serendipitous now:
“That’s what we storytellers do. We restore order with imagination and instill hope again, and again, and again.”
While all is chaos and grief and anger and confusion – we are called to instill hope again.
After yet another shooting.
Instill hope again.
Another terrorist act.
Instill hope again.
Another politician politicizing suffering.
Instill hope again.
Dozens of lives taken with no answers or understanding.
Instill hope again.
And again.
And again.
Social media amplifies the arguments, frustration, pain and the chaos that follows political division, natural disasters and man-made tragedies.
That idea of restoring order sounds really good right about now, doesn’t it?
I am convinced the conversation of STORY is needed now more than ever. We each need to be reminded of the power we have as storytellers.
You’ve heard, “look for the helpers,” which is part of a quote from childhood icon Fred Rogers about where to find inspiration following a crisis.
I say, look for the storytellers.
You and I have a tremendous opportunity to re-write the narratives society plays out day after day.
Because you can tell a story well, you have influence. More than you know.

Thanks for reading. Thanks for being here. Thanks for being willing to use your voice to change the narrative. This is not the time to stay silent, HarrisP.S. If you’re looking for some more direction, check out a panel discussion that we had about racial reconciliation last year. Or read this post from poet Micah Bournes or listen to Nikkolas Smith’s talk about the ways that they are using their art to influence change. As African American artists, they are going to give far better direction than I ever could. 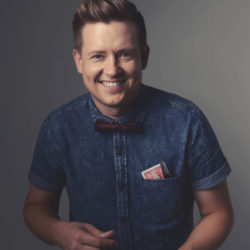 Director and curator of STORY.

Posted in Uncategorized on August 15, 2017 by Harris III.