MacKenzie Huynh on Shifting Your Perspective

With January over, and February in full swing, we here at STORY took some time to catch up with MacKenzie Huynh, a Creative Lead at Pinterest. MacKenzie sat down to speak with Harris, III about a campaign Pinterest recently launched that embraces the “What If” moments we all dream about but may be hesitant to fully step into. MacKenzie shared a bit about her own story from print media to digital and how finally doing the thing we may be scared of could prove to be our best move yet.

One of MacKenzie’s big “What If” moments came in the form of “What if I was to give a talk one day?” and she saw this become a reality at STORY 2017:

“For me, […] I really wanted to give a talk and I wanted to share my work and I wanted to articulate for myself my journey of leaving print and going to a tech company, hopefully to inspire people because that was a really scary leap. I felt like the most unqualified person to make that leap and I did […] and everybody has that leap they want to make. And for everyone it’s different and very individualized and whatever it is it can be part of your journey to go after it and take that leap.”

We couldn’t agree more that doing things that scare us are good for us and could prove to be the catalyst for our biggest dreams and goals but most of us also have that strong voice of self-doubt that lives in our brain. This voice tells us that we should give up, that we’re not good enough, or that we’re not strong enough, and MacKenzie decided to give this voice in her head a name – “Amber”.

“I think we all have that internal voice of self-doubt, it may not be an Amber for each of us, but everyone has their own version of Amber – that rude, doubting, voice of imposter syndrome that just doesn’t entirely believe that you deserve the good things you get, that you’re capable of going after what you want. It’s that sort of nagging doubtfulness that holds you back.

It may sometimes seem difficult to fight this voice off, but MacKenzie had a few pointers for how she tries to stay creative while quieting Amber. She says that it is an ongoing discipline with herself, but she feels empowered by working on a campaign that is all about working past self-doubt. MacKenzie also shared that she feels there is a domino effect in place. If we can garner confidence by doing one small act, then we can continually move onto bigger things until Amber finally takes a hike. MacKenzie’s first small domino? Dying her hair platinum.

“A small “What If” can be very impactful. Maybe it helps you to channel new parts of yourself or to feel more empowered when you walk into a room.”

There is nothing like walking into a room and feeling like you have the confidence to accomplish the things you want. If we start somewhere, maybe dying our hair platinum, or sharing a new idea with someone, who knows the domino effect that it may begin in our creative lives. For MacKenzie, it was giving her talk at STORY, and now working on the “What If” campaign:

“Especially creative work that is good has a real truth to it and oftentimes that truth is very universal. We don’t all have the same “What If” but we all have something that we want to do and things that we feel held back by and so that’s what makes it really compelling and gives it that universal ‘truthness’ and makes it its own interesting story.

Like, yes, it’s a Pinterest campaign but it’s also a thing that I think any human on this earth can relate to and I think that’s when creative work is its most compelling – when everyone can kind of interpret it in their own way and bring it to life for themselves.

After hearing MacKenzie talk about her own journey from being “one of the last people to sign up for Pinterest” because she wasn’t great with tech stuff to now being a Creative Lead for the company was particularly inspiring. She talks about how we can bring creativity into our own work environments and if there is one thing we should remember from this inspirational creatives mouth, it may just be this:

“Amber can just shut up.” 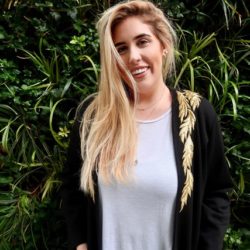 Posted in Uncategorized on March 6, 2018 by Jourdan Pace.